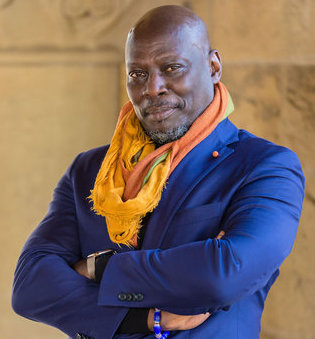 Ato Quayson has been named winner of the 2021 Warren-Brooks Award for his book Tragedy and Postcolonial Literature (Cambridge University Press, 2021).

Tragedy and Postcolonial Literature examines tragedy from the Greeks through Shakespeare to the present day, while exploring the themes of suffering and ethics in postcolonial literature in order to expand the terms by which Western tragedy has long been understood. Dr. Quayson will visit WKU on Sept. 16 to accept the award and give a guest lecture.

Dr. Quayson is the Jean G. and Morris M. Doyle Professor in Interdisciplinary Studies and Professor of English at Stanford. He has published six monographs and eight edited volumes. His monographs include Strategic Transformations in Nigerian Writing (1997), Postcolonialism: Theory, Practice, or Process? (2000), Calibrations: Reading for the Social (2003), Aesthetic Nervousness: Disability and the Crisis of Representation (2007) and Oxford Street, Accra: City Life and the Itineraries of Transnationalism (2014), which was co-winner of the Urban History Association's 2015 Best Book Prize (non-North America) and was named in The Guardian as one of the 10 Best Books on Cities in 2014.

Dr. Quayson has held Fellowships at the Du Bois Institute for African American Studies at Harvard (2004), and the Research Centre in the Humanities at Australian National University (2015). He was the 2011-12 Cornille Visiting Professor in the Humanities at Wellesley College and is founding editor of The Cambridge Journal of Postcolonial Literary Inquiry. He was President of the African Studies Association (2019-2020) and is an elected Fellow of the Ghana Academy of Arts and Sciences, the Royal Society of Canada, and of the British Academy.

He has lectured widely in Africa, Europe, Canada, the United States, Singapore, Turkey, Hong Kong, Australia, and various other places.

Dr. Quayson curates Critic.Reading.Writing, a YouTube channel on which he discusses various topics in literature, urban studies and the humanities in general.

The Warren-Brooks Award, presented each year by the Robert Penn Warren Center at Western Kentucky University, was established by the Warren family to honor an outstanding work of literary scholarship that embodies the spirit, scope, and integrity of the work produced by Warren and his frequent collaborator, Brooks.