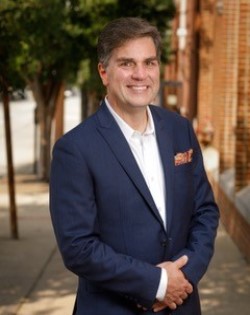 Wrote the CSR program for the US lottery industry. Serves as vice president of the board of directors of the Nat’l Council on Problem Gambling, and one of seven members of the World Lottery Association’s Responsible Gambling Workgroup which sets global CSR policy for the lottery industry.

I’m a dad to two boys, I never outgrew playing with Legos, and am slightly obsessed with the movie “A Christmas Story”.

Most Vivid Memory of WKU

There were two very distinct moments for me on The Hill when I literally heard the angels sing:

- The first time in what was then the ETV studio when I sat on the old “Western Weekly” TV show set as the host, and the tally light on my camera came on. Even though I was only 19, I’d dreamt of that moment for years.
- The first time I ever put on my Spirit Master jacket and tie. That’s as close as I think I’ll ever come to wearing the Iron Man suit.