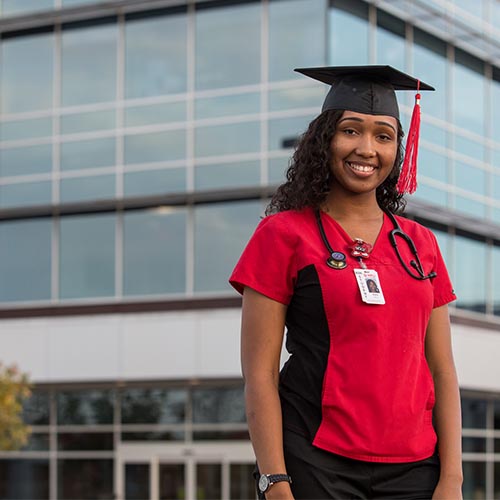 WKU senior Riana Berry from Lexington will graduate on December 14 with a Bachelor of Science in Nursing (BSN) degree with hopes of working in mother-baby services. Her journey at WKU started off similar to many students, and a few pivotal moments helped narrow her direction.

Every semester countless students begin college without declaring a major. For Berry, she knew she wanted to pursue a degree in healthcare, but she was unsure how well she would do in such a competitive program. As a first-generation college student, Berry had support from her parents, but had to learn about college mostly on her own.

“I didn’t apply for the nursing program because I was discouraged. Like I said, I am first generation, and I kind of needed that push,” Berry said.  “And, after having a conversation with my dad. He kind of opened my eyes and said ‘you are not there to waste time and don’t let anyone discourage you’.”

Before the start of her second semester, Berry chose to pursue a degree in nursing.  She knew that the decision to pursue nursing would be followed by hard work.

“It takes (a good) work ethic, discipline, determination, believing in yourself, and giving yourself some personal time,” Berry said. She admitted to remaining focused in the program and being conscious of her involvement on campus outside of the classroom. However, in the classroom, the nursing program provided hands-on experiences. Berry said they began by working with mannequins. They later progress to clinical groups at a hospital, which is followed by doing clinicals without the group.

“It is your time to really take responsibility, and be in that nurse role. You are still a student, but you have to switch your mindset into thinking this is going to be me after I graduate,” Berry said.

By the time summer 2018 came, Berry needed to select a focus, and her five-week KIIS study abroad program to Tanzania helped with that. The program, directed by Professor and Department Head of Public Health Dr. William Mkanta, included a community health course and nursing practicum. It provided an opportunity for the nursing students to work in the hospital there and rotate the areas in which they worked.

“I think ER was my first. Then, once I got to OB (obstetrics), I was like ‘I’m not ready to switch. I want to stay here,’” Berry said. “Over there it is so different. Their tolerance for pain is a lot different. They don’t have the same pain medications that we do. So, being there and helping them (mother and child) bond - it was just amazing. I loved seeing it.”

Berry acknowledged that the students were in the hospital a majority of the time. She was able to provide assistance and help patients in ways that students are unable to do in America.

“I got to kind of compare U.S. healthcare with their healthcare. It is a lot different. A lot of people got emotional at times. Technological advances over here is nothing like it is over there. But, they do a lot of improvising and working things out,” Berry said.

During her time in Tanzania, Berry helped deliver two babies and determined her preferred area of nursing was in mother-baby services.

After graduation, Berry plans to return to Lexington to work as a nurse. She looks forward to being a positive example to her family members also in college and planning to attend.