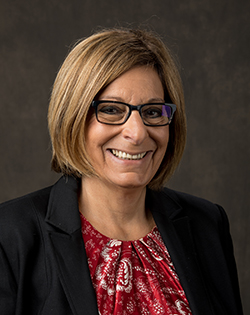 The average person spends as much as 12 hours per day consuming media, both traditional and online. That time spent in front of screens can introduce our brains to more than 30 gigabytes of information each day. Think of it this way: one gigabyte is the storage equivalent of 200 photos!

It’s an interesting paradox: although many of us are confronted daily by more information than ever before, we may or may not be effectively absorbing (and using) that information. Helping Western Kentucky University not only improve their information literacy, but also their civic literacy, is the focus of research that’s underway by Molly Beth Kerby, Ph.D., associate professor, Sociology & Criminology, and Gayle Mallinger, Ph.D., associate professor, Social Work.

Information literacy involves locating information, evaluating its veracity, utilizing evidence, and clearly arguing reasoned conclusions, according to the Association of College and Research Libraries. Civic literacy is defined as critically and objectively thinking about the country’s fundamental premises and practices, including its basic function, structure, and political processes, according to civic literacy scholar John Marciano.

Using data to make a bigger impact inside and outside of the classroom.

Kerby and Mallinger’s research began nearly three years ago as many studies do — with a conversation.

“We bounced ideas off of one another,” Mallinger says. “[Kerby] teaches classes that are very specific to helping students with information literacy, such as a fake news class or a public problem-solving class where the focus is being able to ascertain what’s factual, what’s assumption and how to go to primary sources to get information.”

Mallinger was in the midst of teaching another course, this one on diversity and social welfare. She wanted to help students compare and contrast how we in the U.S. look at different social welfare issues — poverty, child welfare and immigration, for example — and how they’re viewed and remedied in other countries.

Data collection began two and a half years ago, including pre- and post-class testing and the creation of control groups that didn’t receive any intentional treatments. So much of the research at WKU is facilitated and analyzed with the help of students. In this case, WKU students are the ones providing the data, giving them the added perspective of actually participating in a research study.

Kerby and Mallinger hope to discover not only if the classes themselves help increase civic and information literacy among the students, but what particular format works best.

“My fake news class was 100% focused on information literacy, but in another class, I invited an expert to come in and we spent a week on the topic,” Kerby says. “I’m curious to see if just a little bit helps in a more modular approach or if you need an entire class.”

Depending on what the data reveal, that information could be used to help WKU faculty refine their approach to their curriculum — perhaps by adding a specific unit focused on information and civic literacy

“In one class, I discuss library literacy and show people how to find a helpful article at the library,” Kerby says. “In another class, I ask a librarian to come and speak about the same topic. All of that data is tagged — did the librarian explain it better than me? Even though you know how to do something, can you teach someone else how to do it?”

The findings could also have benefits outside the WKU campus, even as far as nationwide.

“How can we design workshops, professional learning communities, classes and events so that we can help students become more critical thinkers?” Kerby says. “I’m hoping we could put a monograph or a map together to help universities assess not just their classes, but also their civic programs and events.”

Many schools and universities (including WKU) are participants in the American Democracy Project, an initiative spearheaded by the American Association of State Colleges and Universities.

The goal of the project, according to AASCU, is “to produce college and university graduates who are equipped with the knowledge, skills, attitudes and experiences they need to be informed, engaged members of their communities.”

Kerby is a Civic Fellow for the American Democracy Project and says the group has focused on a variety of issues, including land use, how we talk about politics, voting education and global citizenship. Depending on conclusions reached from the analysis of the research data, Kerby could also use those findings to help groups like the American Democracy Project adjust their programming to make their outreach efforts even more effective.

“For voter education, we’ve held Rock the Vote events on a variety of campuses,” Kerby says. “How do you assess the impact of those events?”

Kerby and Mallinger are preparing for the next phase of the study: data input and analysis. WKU graduate student, Jackie Travis, will be working with them to assist with what Kerby says is “a ton of data. We were sampling classes every semester for two and a half years.” In fact, Mallinger will be on sabbatical next semester so that she can “really immerse” herself in the data, she says. “We’re excited to see if our labor bore fruit.”