Patti Stanton grew up in Tennessee, and came to Kentucky to attend WKU. She began her teaching career in the Barren County School System, where she taught elementary and middle school band for three years. She then took a hiatus of several years to work in youth ministry with her church. After moving to Lexington, her first teaching assignments were beginning orchestra and band at several elementary schools in Fayette County. She was later able to move back to teaching her favorite level, middle school, and served as the Assistant Director of Orchestras and Bands at Winburn Middle School in Lexington, where she also directed the jazz band. She retired after her 19th year at Winburn Middle School where the students benefitted daily from her rehearsal and sectional skills.

Throughout her career she enjoyed the fact that all students who play an instrument contribute to the success of the group and the beauty of the music they perform. She would often tell her classes, “There is no bench on this team! Everyone is in the game and every one of you is important!” Not all of her students could afford to take private lessons. Though they could contribute to her ensembles, that made them less likely to be able to one day compete for a music scholarship on their instrument.

As a high school senior feeling called to be a band director, Ms. Stanton found herself in a similar situation. “When I was about to start college I realized I had fallen through a crack in the system and did not qualify for a grant. I also was not accomplished enough on my instrument to compete for a scholarship. I was determined to be a band director though, so my undergraduate degree was paid for almost exclusively with student loans.”

Ms. Stanton began her coursework at Volunteer State Community College and transferred to WKU as a junior. She holds a Bachelor of Music Education and a Master of Science in Education from Western Kentucky University, and a Rank I in Music education from Eastern Kentucky University, which included coursework from Vandercook College of Music in Chicago.

She still marvels that she was actually paid to do something she so thoroughly enjoyed, and hopes this scholarship, which is intended to bridge the financial gap for students aspiring to be a band or orchestra director, will help others enjoy that experience as well. 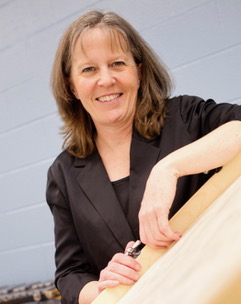