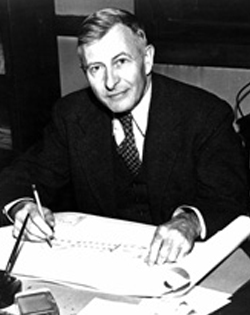 Dr. Garrett (b. 1893) succeeded Dr. Cherry as the school and CHF president. Under Garrett, the institution became known as Western Kentucky State College (1948). He earned A.B. and M.A. degrees at Georgetown (Kentucky) College. He completed additional graduate work at the University of Chicago and the University of Kentucky, and was awarded an honorary LL.D. from Georgetown College in 1938. He served his country during World War II in the Army. Dr. Garrett, who died at age 61, is the namesake of the Garrett Conference Center, which was completed in 1953.

Under Dr. Garrett, the College Heights Foundation continued to emphasize and utilize the student loan fund, as well as secured funding from the state, Public Works Administration and private donors to complete the work on the Kentucky Building.  This magnificent building, designed by architect Brinton B. Davis, was a dream of Dr. Cherry’s. It was dedicated in 1939, and housed the College Heights Foundation until 1957.