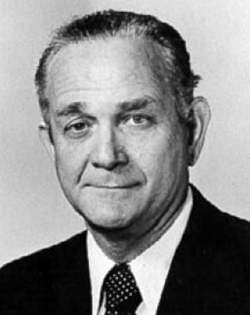 Dr. Downing (b. 1921) followed his predecessors as president of both the university and CHF, but since the reorganization of the CHF, he did not hold the positions simultaneously. He followed Dr. Thompson in each role – 1969 and 1979, respectively. He served as registrar, director of admissions, dean of business affairs, and vice president for administration before being named WKU’s fourth president in 1969. He remained president of WKU until 1979, at which time he took the helm of the College Heights Foundation. He led the Foundation until 1999, and stayed actively involved at WKU until his death in 2011 at age 89.

Under Dr. Downing, the College Heights Foundation continued to flourish.  The endowment grew to more than $16 million and the number of individuals who included WKU or the College Heights Foundation in their estate plans had reached an all-time high.  By the time of his retirement in 1999, the CHF was providing $638,000 annually in scholarship support benefitting more than 900 students.