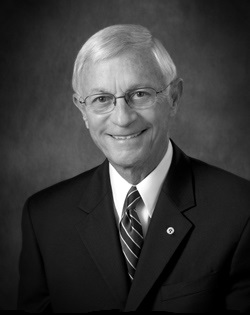 Cherry entered the Air Force in 1959 as an aviation cadet and was commissioned a Second Lieutenant in 1960. His military credentials include flying 295 combat missions during the Vietnam War. During his Air Force career, he also held the positions of Commander of Moody Air Force Base, Inspector General of the Pacific Air Forces, Commander of the 8th Tactical Fighter Wing flying the F-16, and Commander of the Air Force Recruiting Service.

He also authored a book, My Enemy, My Friend – a Story of Reconciliation from the Vietnam War, about reuniting with a Vietnamese pilot he shot down during the Vietnam War.

Cherry’s book My Enemy, My Friend chronicles an intense 1972 dogfight between Cherry’s F-4 Phantom and a North Vietnamese MiG-21, as well as the aviator’s subsequent meeting and friendship with the MiG pilot, Nguyen Hong My. Cherry travels extensively, giving speeches and promoting his book in an effort to help Vietnam War veterans bring closure to their war experiences.

He also serves as Executive Vice President of Aviation Heritage Park, an educational facility in Bowling Green, Kentucky, which exhibits aviation artifacts that represent the careers of distinguished aviators from south central Kentucky.  He has also served in state government as Secretary of the Kentucky Justice Cabinet and as President of the Warren County Intermodal Transportation Authority.

After he attended WKU, Cherry received an undergraduate degree from Florida Southern College and his master’s degree from the University of Southern California.

Cherry, who is the grandson of WKU founder Dr. Henry Hardin Cherry, has also served on the WKU Board of Advisors, as well as the Boards of the College Heights Foundation, the WKU Research Foundation, and the Center for Information Technology Enterprises (CITE).  He was inducted into WKU’s Hall of Distinguished Alumni in 2013.

He and his wife, the former Sylvia Cooper, live in Bowling Green, Kentucky, and have two daughters, Jill Tweed and Kim McGowan, and four granddaughters.