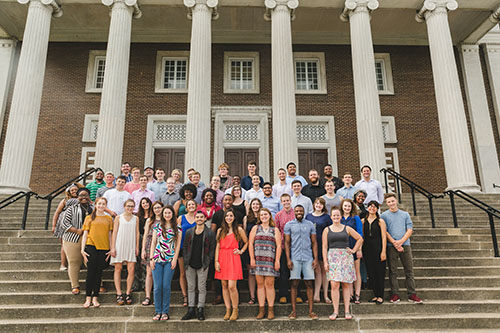 Seven members of the WKU Forensics Team traveled to Boise, Idaho to compete in the 50th Biennial Pi Kappa Delta Convention and National Tournament the weekend of March 21-25.

The team also closed out the final round of Lincoln-Douglas debate, and all students advanced to an elimination round in at least one event. Rather than ranking students to individual placements, students at the PKD Convention earn an Excellence Award for ranking in the top 20 percent and a Superior Award for ranking in the top 10 percent. Hosted bi-annually, the PKD national tournaments are the oldest forensic honorariums in the nation.

The WKU team will travel to Peoria, Illinois, this weekend (March 30-April 1) to regain the national championship at the American Forensic Association National Individual Events Tournament.

WKU will close the season April 11-18 in Eau Claire, Wisconsin, at the National Forensic Association’s national tournament, the final collegiate speech tournament of the year.

Here is a listing of WKU events for Tuesday, May 17, through Saturday, June 4.

WKU graduate is driven by a passion for military and business

Lee Friedman from Princeton, Indiana, has always been passionate about the military and small business, so it was no surprise when he chose WKU's Gordon Ford College of Business and the WKU Army ROTC program.