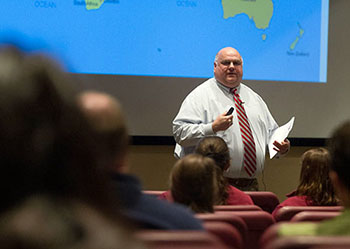 More than 80 high school journalists and advisers from 10 high schools across Kentucky attended the 37th annual Mark of Excellence newspaper, broadcasting and online awards ceremony at WKU on March 24.

The competition is co-sponsored by WKU’s School of Journalism & Broadcasting and the WKU chapter of the Society of Professional Journalists.

Nine Kentucky high school newspapers, eight broadcasting programs and six online news outlets from across the state entered the 2017 competition with a total of 126 entries in 24 categories.

The keynote speaker for the awards ceremony (pictured above) was Chuck Clark, the director of Student Publications at WKU. A WKU graduate, Clark returned to his alma mater in 2012 after working as an editor or writer at numerous newspapers throughout the southeastern United States, most recently as managing editor at the Birmingham News in Birmingham, Alabama. Clark talked to the students about why journalism is more important today than ever before.

Dr. Janet Hagemeyer Tassell, a professor with the School of Teacher Education in the College of Education and Behavioral Sciences, will spend a semester in the Czech Republic teaching and researching mathematics teaching approaches thanks to a Fulbright g