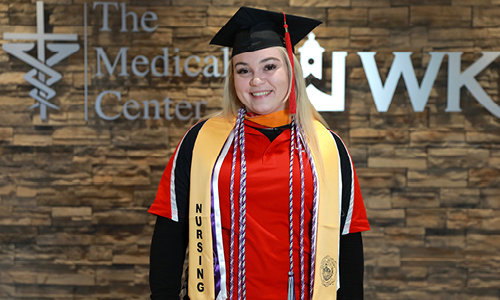 When Alexandra Renee Mohamed lost her home in the December 11 tornadoes, the support she received from the WKU School of Nursing and Allied Health impacted her decision to return to college in January. Almost a year later, she will graduate from Western Kentucky University on Friday with a Master of Science in Nursing degree, and then begin a career in labor and delivery.

On December 10, 2021, Mohamed had taken her last exam to complete her first year in the Nursing program. “My winter break dreams of relaxing and taking a break from school were suddenly replaced with finding housing, a vehicle, and getting situated for the upcoming semester,” she said. Less than 24 hours later, three tornadoes came through Bowling Green causing immeasurable devastation. She and her husband lost everything, but they did not lose hope.

“WKU and the School of Nursing really came together to make sure their impacted students were OK, and for that, I will forever be grateful,” Mohamed expressed. She received the opportunity to move into a campus residence but secured housing elsewhere. The University provided gift cards for Mohamed to obtain needed items, and countless people reached out to offer support.

“It showed that they really did care about the well-being of their students,” Mohamed explained. “I had considered taking a semester off to deal with the emotional turmoil that came with the aftermath, but I ultimately decided to continue on, with the help and encouragement of the nursing program and my peers.”

The University, along with the WKU School of Nursing, reaching out to Mohamed is symbolic of the reason she decided to go into the nursing field.

“Nursing helps people in their darkest times and nurses help advocate for the best care for their patients. As a nurse, you can help make a real difference in someone’s life,” Mohamed said.

She recalled a moment that confirmed nursing as the field for her. During clinicals, she met a patient unable to care for himself and spent two hours working on his hair. “I still think about that. It was over a year ago,” Mohamed said.

Mohamed, who earned a Bachelor of Arts degree in International Relations, joined the Master Entry Nursing Professional (MEPN) program in 2021. MEPN creates a pathway for students with an existing bachelor’s degree to take classes over the course of two years resulting in earned bachelor’s and master’s degrees.

“I was awarded the Benjamin A. Gilman International Scholarship sponsored by the United States Department of State for the Summer of 2019. With the scholarship, I did a summer abroad in Jordan studying Arabic and the Palestinian - Israeli conflict,” Mohamed said. After her experience there, she took six months to decide how to move forward with her master's. “When I learned about the MEPN program in December 2019, I decided I wanted to do that, and I immediately got signed up for the two prerequisite classes I needed to enter the program.”

In her two years, Mohamed participated in different experiences to help shape her WKU experience. One activity included the Kentucky Association of Nursing Students, with Professor Deanna Melloan, who gave students the chance to become involved in charity and community engagement.

“These activities allow nursing students to attend different informational related nursing sessions that range in topics from different options for nursing careers to how to utilize different interpretation services for patients with limited English proficiency,” she said.

Mohamed, who acknowledged her passion for preventative measures to ensure safety, spent time administering hundreds of COVID-19 vaccines when they first became public.

“Everything you learn in nursing builds on previous learning,” Mohamed said. “The journey of nursing education acts like Lego blocks, and each piece works together to create a masterpiece of knowledge relating to different aspects of evidence-based nursing care.”

Mohamed’s evidence-based research interest lies in the correlation between medical interventions, like labor inductions and epidurals, and cesarean section rates. She shared a story of a class project she chose on epidurals and researching if they lead to an increased risk of having a cesarean section delivery.

Mohamed explained that this research topic ties to her interest in pursuing a Doctor in Nursing Practice degree in midwifery in a few years, “once I have established my skills as a labor and delivery nurse,” she said.

Mohamed is studying for the NCLEX licensing exam. After graduation, she will leave for Phoenix, Arizona, to work for Banner Estrella Medical Center in the Labor and Delivery unit.

Going back to how this story started, on December 11, although Mohamed speaks little of her experiences volunteering during tornado recovery, those moments stick out to others.

“She told me the story of the night of the tornado and how after she realized she was not injured, she jumped into action helping neighbors and checking on a fellow nursing student whose roof was missing,” said Dr. Miranda Peterson, Pedagogical Assistant Professor in WKU’s School of Nursing & Allied Health.

Peterson described herself as the unofficial Tornado Relief Community Medical Coordinator of medical volunteers for 24/7 staffing of a shelter at Jennings Creek Elementary School until Red Cross fully mobilized. She reached out to nursing students providing resources for those affected by the tornado and asking for medical volunteers to assist in providing first aid, sorting, and distributing medical supplies, and assisting with gathering and connecting families with community resources. When Mohamed could volunteer, she did.

“This speaks volumes about Alex's selfless, compassionate character. She has a strong passion for OB nursing, which was my background, and she is so eager to learn and be of service. I know Alex will make a difference in many lives through the experiences she has had and the nurse she will now become,” Peterson said.

To learn more about WKU’s School of Nursing and Allied Health visit wku.edu/nursing.

#WKUGrad series:  As part of our #WKUGrad series, articles on graduating students are shared in the weeks leading up to Fall Recognition Ceremonies. See all of their stories at bit.ly/wkugrad.