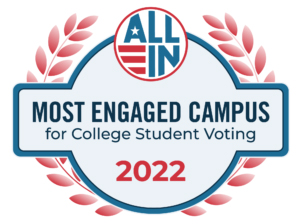 Western Kentucky University has been recognized by the ALL IN Campus Democracy Challenge (ALL IN) as a 2022 ALL IN Most Engaged Campuses for College Student Voting.

The ALL IN Most Engaged Campuses for College Student Voting recognizes colleges and universities for making intentional efforts to increase student voter participation.

“WKU is committed to motivating its students to become engaged citizens in our American democracy,” said Dr. Molly Kerby, AASCU’s American Democracy Project Campus Coordinator. “A huge part of that effort is encouraging our students to participate in local, state, and federal elections. Our Political Engagement Project, led by Dr. Saundra Ardrey and the Political Science Department, has played an enormous role in creating educational opportunities for students to learn about the U.S. Constitution and to become active participants in the political process.”

WKU joins a group of 394 colleges and universities recognized by ALL IN for completing these four actions:

“Voting is not simply a right in this country, but the duty of all citizens to make informed decisions about public affairs and representation; it truly is the one thing that makes us who we are and, we at WKU, are ALL IN,” Dr. Kerby said.

“College student voter turnout has increased since 2016, and this increase has been driven by students. The ALL IN Campus Democracy Challenge is excited to expand our ALL IN Student Voting Honor Roll to recognize these student voting champions across the country,” said Jennifer Domagal-Goldman, Executive Director of the ALL IN Campus Democracy Challenge. “These students registered voters, served on their campus voting coalitions, spearheaded voter education efforts, advocated for campus polling locations and organized other voter engagement efforts to ensure their peers were confident and informed voters. We are excited to see what they continue to accomplish ahead of the 2022 midterms.”

About ALL IN Campus Democracy Challenge: The ALL IN Campus Democracy Challenge (ALL IN) is a national nonpartisan initiative of Civic Nation, a 501(c)(3) organization. The ALL IN Campus Democracy Challenge strives to change civic culture and institutionalize democratic engagement activities and programs on college campuses, making voter participation a defining feature of campus life. ALL IN, in collaboration with over 960 higher education institutions, seeks to make participation in local, state, and federal elections a social norm; substantially increase the number of college students who are democratically engaged on an ongoing basis, during and between elections, and not just at the polls, and; make educating for democratic engagement on college campuses an accepted and expected part of the culture and curriculum so that students graduate with the knowledge, skills, behaviors, and values needed to be an informed and active citizen.