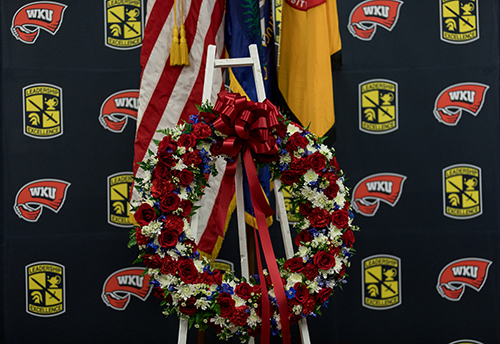 Update: Due to rain, the Veterans Day ceremony will be held in Nite Class in the Downing Student Union.

WKU will observe Veterans Day at 11 a.m. Friday (Nov. 11) with a wreath-laying ceremony at the Guthrie Bell Tower followed by the ROTC Hall of Fame Induction Ceremony.

Here is information from WKU ROTC on this year's Hall of Fame inductees:

Soldier-scientist Dr. Colonel William E. “Ed” Houston was a pioneer in the field of environmental toxicology who dedicated 51 years to the analysis, development, and production of drugs, biological products, medical devices, training materials, and emergency procedures.

Ed graduated from WKU in 1960 with a USAR commission into the Medical Service Corps which was changed to a Regular Army commission because of his outstanding performance as a Lieutenant. Subsequent assignments included being the Director and Chief Virologist, 5th Army Medical Laboratory, the MSC Officer Advanced Course, and Chief of the Bacteriology Branch of Microbiology with the Sixth Army Medical Laboratory.

In 1971, Ed earned his Doctorate in Molecular Biology at Vanderbilt University and reported to the Office of the Chief of Research and Development in Washington, D.C., until he was reassigned to the US Army Medical Research Institute of Infectious Diseases (USAMRIID) at Fort Detrick, Maryland. With firsthand experience in lab research, Ed received a change of orders to be the Director of the US Army Medical Research Program in Microbiology and Infectious Diseases at Medical Research and Development Command, Office of the US Army Surgeon General in Washington, D.C. Promoted to Lieutenant Colonel in 1976, Ed completed Command and General Staff College in 1978. He served as the Deputy Commander of the US Army Medical Research Institute of Chemical Defense (USAMRICD) at Aberdeen Proving Ground, Maryland. Promoted to Colonel in 1980, he assumed command of the Army’s Medical Chemical Defense at Ft. Detrick. He was the Senior Director of the largest tri-service medical research program in the DoD.

Following 25 years of active duty, Dr. Houston was named Vice President of Northrop Services, Inc., for the environmental toxicology laboratory at The Research Triangle Park, North Carolina. Ed accepted a professorship at WKU teaching toxicology, microbiology, and anatomy and physiology. In 2001, Ed accepted a position at Louisiana State University to establish and lead the National Center for Biological Research and Training (NCBRT). The last 15 years of his professional career were spent traveling with this team as a principal lecturer.

Doug Verdier, the son of a World War II veteran, was born and raised in South Central Pennsylvania. He spent his formative years surrounded by grandparents and aunts who watched him enjoy baseball, camping, and the Boy Scouts. His family moved to Bowling Green during his senior year of high school, and there began his association with Western Kentucky University. He registered for classes and at his father’s urging, he signed up for ROTC. His love of literature and flair for writing led him to becoming the Editor of the College Heights Herald. He excelled in ROTC and in February 1964 was designated a Distinguished Military Graduate with a commission as a Second Lieutenant of Infantry.

He attended the Infantry Officers’ Basic Course and Airborne School. He was assigned to the Fourth Armored Division in Germany where he served in a variety of junior officer positions.  After attending the Jungle Operations Course in Panama, Doug was assigned to the 1st Cavalry Division in Vietnam. In Vietnam, he earned two Bronze Stars, one with a V Device, the Air Medal, and the Combat Infantryman’s Badge. He earned his Bronze Star w/V when while leading his company against a large enemy force, he exposed himself to hostile fire. He bravely led his troops to forward fighting positions and directed suppressive fire on the enemy emplacements. Doug toyed with the idea of leaving the military and going to law school, but the Army denied his request because of the need for young officers in Vietnam. He stayed and was rewarded with another tour in Vietnam after completing the Infantry Officers’ Advanced Course. This time he served as a MACV Training Advisor. He asked for and received another tour in Germany with the 1st Armored Division as a battalion S-3 Air, S-3, and S-1 in three years.  He was selected for CGSC and reassigned to Ft Leavenworth, Kansas, with a follow-on assignment to The United States Military Academy at West Point. Prior to reporting to West Point, Doug earned a master’s degree in English at Ball State University.

The Army then moved Doug and his family to Ft McClellan, Alabama for an assignment as the installation Public Affairs Officer. After two years in that assignment, he was chosen to be the Special Assistant to the Chief of Staff. Doug was then hired as the speech writer for the CG of FORSCOM. He travelled with the CG extensively and learned how the Army operated at the highest levels. Doug retired after 22 years of distinguished service. He worked for the American Red Cross in Marketing and Public Relations and later as an Assistant Manager for the Minnesota Orchestra. He currently resides in Minneapolis where he is an active volunteer and committee member with several Twin Cities non-profit organizations.

The national theme of Black History Month 2023 is Black Resistance. That was highlighted at Wednesday night’s opening ceremony at WKU. WKU’s Amy Bingham has more in this week’s View from the Hill.