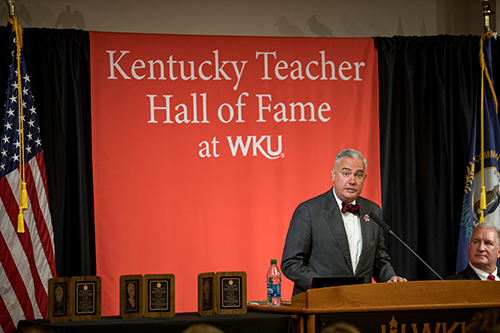 The 2022 inductees, Katy Cecil of Hodgenville, Addie Henry of Richmond, and the late Wilma Pace of Hardin, were formally recognized in the ceremony at Gary Ransdell Hall.

“This is a remarkable opportunity for us to celebrate and recognize three important individuals in our state,” WKU President Timothy C. Caboni said.

President Caboni congratulated this year’s inductees and thanked all teachers for their work that extends beyond the classroom.

The newest Hall of Fame inductees were honored and humbled by the recognition.

“It’s an amazing honor. It’s unbelievable,” LaRue County High School teacher Katy Cecil said, noting that teaching is the family business. Both of her parents were teachers as were four of their five children. Cecil’s husband and their daughter also teach.

“To think about the legacy of education that’s in my family. You add it all up and it’s over 150 years of teaching,” she said.

Addie Henry, who retired in 1996 after teaching for 28 years in Breathitt County, said her selection to the Kentucky Teacher Hall of Fame “came as a total surprise.”

“I was absolutely delighted and very surprised. I felt both honored and humbled,” Henry said.

Carolyn Johnson and Douglas Pace, the children of Wilma Pace, said their mother would have been humble and grateful. Pace, who taught for 29 years, died in 2012.

Jamie Link, Secretary of the Kentucky Education and Labor Cabinet, said: “Each of these inductees excelled in their profession and possessed the remarkable ability to empower each of their students and set them on the path to success. We salute them and all the teachers throughout the Commonwealth.”

State Sen. Mike Wilson thanked all teachers for the jobs they do. “The most important job that we have in the state and in the United States is that of a teacher,” he said.

Lt. Gov. Jacqueline Coleman offered congratulations via a video message and noted the vital role teachers play in Kentucky’s economic future. “We need great teachers now more than ever,” she said. “The Commonwealth is experiencing an economic boom like never before. We must have a workforce that meets this moment.”

Corinne Murphy, Dean of the College of Education and Behavioral Sciences, introduced this year’s Hall of Fame honorees and shared highlights of their teaching careers.

Katy Cecil is a teacher at LaRue County High School (2009-present), teaching English and Public Speaking to every grade level. Her entire career has been in the LaRue County School System; she worked LaRue County Middle (2001-2009) as 7th and 8th grade Language Arts and Humanities teacher before moving to the high school. A colleague says, “Her approach to teaching is inclusive and welcoming, and she strives to make her content relevant to her students’ lives and the world in which they live.” A former student says students in her class “push themselves to be the best, often for no other reason than they want to be the person Mrs. Cecil sees.”

She is also the speech and debate coach, winning Coach of the Year in Kentucky as well and was inducted into the Kentucky Speech Hall of Fame in 2015. A former student turned educator calls her a “safe haven, a motivator, a coach, and a guiding light” and credits Cecil for helping “conquer my performance anxiety, overcome my stutter, and become a regional champion and state finalist… she expanded my worldview, taught me empathy, and restored my confidence.” The Executive Director of the Kentucky High School Speech League fondly speaks of her leadership and heavy influence on Speech and Debate, saying Kentucky “benefits from her belief in others.”

She’s credited with revitalizing the drama program as the director. Her efforts are for the whole community. Students of all ages and even adults participate in the many plays she directs and organizes every year. Her nominator noted even a global pandemic didn’t stop her, Cecil “managed to organize a play for the students and town, giving everyone a brief escape.”

If that wasn’t enough, she also dedicates her time to ACT Prep. Her nominator says she “sacrifices her weekends and evenings to ensure her students receive they help they need... she never fails to be there for her students.” A former student says, “the care she shows every student to help them learn important life lessons as well of the curriculum… is exact why so many of her students excel” on AP and ACT tests.

A final fun note that shows the impact Cecil has had on her students and the community in LaRue County, one of her former students notes that anyone can order her favorite treat at Baskin Robbins by asking for a “Katy Cecil Cappy Blast.”

Addie Henry is a retired teacher with 28 years’ experience teaching English at Breathitt County High School in Jackson (1968-1996). She earned her Bachelor and Master of Arts in Education from Eastern Kentucky University (1968 and 1971, respectively). Henry also taught journalism and was responsible for the annual creation of the school’s yearbook was an advisor for the student council and coordinated the school’s yearly Homecoming events.

A common theme with many of her former students and nominators is her influence has helped them to go on and join the education field as adults. One nominator was her student and later colleague and talked about her love and support saying, “She taught me the ins and outs of the teaching profession… She taught me that the first rule is that you teach your students and then you teach your content.”

A former student and current educator says Henry’s teaching career “was devoted to trying to help young people realize their potential and to encourage them to pursue their dreams.” Another former student and current educators shared that “if you were her student, you knew you were loved… and respected.” Her nominator believes she would have been a high school dropout without Henry. “With this remarkable lady’s approach to teaching, her seemingly never-ending patience, and her continuous encouragement… I was able to succeed.”

Her 24 years as the yearbook advisor and a family and community affair. A former student notes she “was constantly attending school events to take pictures.” A dark room was built as the school so students could learn the ends and outs of photography and design. The Breathitt County Retired Teachers’ Association President, former student, and coworker says in the 1980s, Henry and her late husband opened Murphy Studios, a photography studio, and they took pictures for the senior class every year. Henry also donated the Murphy Studio collection to the local library, allowing families and the community to access and enjoy all their work and relive those precious memories.

The late Wilma Pace taught for 29 years, with nearly all of them at schools in Marshall County, including Hardin High School (1946-1953, her alma mater) and both South Marshall Middle (1975-1980) and High (1958-74). She taught a variety of subjects including English, French, and Business for grades five through 12. Her career started in 1940 after graduating from Murray State Teachers College with a Bachelor of Arts in secondary education and a minor in French. At the time, she was just 20 years old. She took a break for a few years to raise her children, who nominated her for the Kentucky Teacher Hall of Fame, and were also her students. She returned to Marshall County in 1946. Besides teaching, Pace also directed school plays and the chorus, sponsored the Beta Club, Student Council, the school newspaper, yearbook, and more. Pace retired in 1980 and passed away in 2012 at the age of 92.

Pace’s career was filled with all kinds of change. From school consolidations, to adding subjects and programs, from keeping up with changes in resources and techniques, she “adapted… and never wavered.” Her children say, “she had a unique ability to reach the basic fundamental skills at whatever grade level she was assigned while instill a passion for learned and prepare her students.”

Her former students praise her for teaching them proper grammar and use of the English language, and they credit her with their ability to handle writing at the college level and beyond. Two former students, now married, so eloquently explained, “Taking English sentences apart, seeing how one part related to another, helped us learn how to produce a pleasing harmony of words and meaning.”

Several former students commented on her witty, dry sense of humor that not only entertained her students and made her relatable but helped and motivated them to learn. One comment explains, “she has a great sense of humor and was always smiling and encourage her students with her positive attitude.” She was also a mentor to many, taking “time out of her busy schedule to listen, encourage, and give advice.” For one current student that later became a teacher, Pace offered these words of wisdom, “Go in tough. It’s much easier to let up than bear down.”