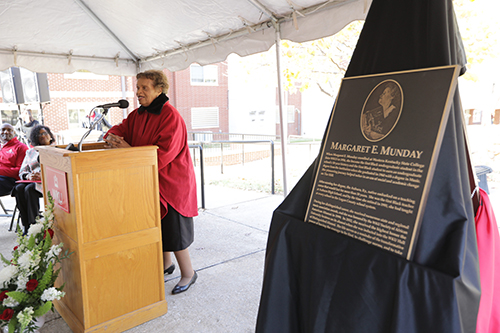 Western Kentucky University dedicated Munday Hall on Friday, October 28, in honor of Margaret E. Munday, the first Black undergraduate student to enroll at the university. Ms. Munday, who graduated from WKU with a degree in music in 1960, was on hand for the dedication ceremony along with family members, friends, former students and students from area schools.

WKU President Timothy C. Caboni initially announced that Northeast Hall would be renamed Munday Hall in July 2021 and noted at that time that the building would be the first on campus named after an African American.

Margaret Munday transferred from Kentucky State College after Kentucky’s higher education institutions, including the precursor to WKU, Western Kentucky State College, were desegregated in September 1956. President Caboni noted that this simple act of transferring from one institution to another led to significant change at WKU. “She became the very first African-American undergraduate student to enroll in classes on our campus, and her journey into unchartered territory helped usher in an era of social and academic change at WKU,” he stated. “She is a trailblazer in every sense of the word, her life marked by a series of firsts that made a path seemingly difficult for so many just a little bit easier.”

President Caboni also noted that the faculty and administrators at the institution, including President Kelly Thompson, Librarian Margie Helm, and Professor Ivan Wilson, provided constant support during her time as a student. “This commitment to ensure that all members of the Hilltopper family know they belong on our campus remains deeply embedded in our institutional culture today,” he said.

Ms. Munday earned her bachelor’s degree in music four years after enrolling and embarked on a teaching career that would last for more than 30 years. After teaching for four years at Johnstown School in Olmstead, she became the first Black teacher at Auburn High School. Eventually, she taught at every school in the Logan County school system. Her career was marked by numerous exceptional accomplishments. For 15 years, she directed the Union District Youth Choir, consisting of members from over 30 different churches. In 1999, she received an honor from WKU’s Society of African American Alumni, and in 2012, she was inducted into the university’s Hall of Distinguished Alumni, the highest honor the institution bestows on its alumni.

In addition to the name of the building that had already been installed on the residence hall’s exterior, a plaque that will hang in the building to honor Ms. Munday was unveiled by the first recipients of the new Munday Hall Scholarship, Jeremiah Morrow and Ashanti Groves. Ms. Munday was presented with a smaller version of that plaque by President Caboni. The housing scholarship, made possible by a gift from George and C.J. Nichols, provides funding for two students each year who reside in Munday Hall.

Ms. Munday noted that she was proud of her legacy at WKU and that she wants her actions to serve as an example for others. “History is in the making for me and WKU,” she said. “When climbing for a goal and you reach that goal, maintain. I hope that students will remember the importance of stepping outside of their comfort zone to pave the way for others.”

President Caboni thanked Ms. Munday for her contributions to the university. “On behalf of all of us at WKU, thank you,” he said. “Your fortitude made our institution stronger, more inclusive, and more welcoming to all.” He also noted that she provides an example for all students to follow. “Each day, we challenge our students to use their talents for the benefit of others. This charge is made easier when we can point them to examples of individuals who have dedicated their lives to doing just that.”