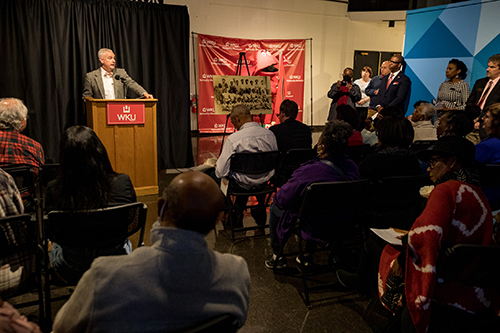 Western Kentucky University hosted an event Thursday to honor the people, the community and the legacy of Jonesville.

The African American neighborhood, founded in 1881, thrived in Bowling Green for more than 80 years. But in the 1960s, the community was dismantled to make way for expansion of the WKU campus.

“Today, six decades later, we join together as a WKU Community, for the first of many occasions, to pay tribute to Jonesville’s rich history and to celebrate the achievements and resilience of its residents,” President Timothy C. Caboni said during a reception and exhibit opening at the Kentucky Museum. “And this is important. Because as we continue our efforts at WKU to uncover and illuminate our institutional history, we must acknowledge the destruction of Jonesville. We must bring together its former residents and their descendants. We must hear their stories. And we must tell their stories – not just within the WKU Community, but also throughout the Bowling Green Community, the Warren County Community and beyond.”

The “What Happened to Jonesville?” exhibit includes a Jonesville buon fresco mural by Alice Gatewood Waddell and features 15 interpretative panels of photographs and stories from interviews with families from the Jonesville neighborhood. Waddell, a Jonesville descendant, created the original Jonesville piece, and Art professor Mike Nichols and students Aisha Salifu, Cecilia Morris, and Riley O’Loane collaborated with Waddell to make the artwork a mural at the Kentucky Museum.

Honoring Jonesville: Our People, Our Community, Our Legacy is the theme for initial activities planned by the Jonesville Reconciliation Workgroup, established by President Caboni in spring 2022 to assess the best ways to honor Jonesville and appropriately address the issues that remain from the removal of the neighborhood. Members of the workgroup include WKU alumni, WKU employees, descendants of Jonesville, and individuals from the Bowling Green/Warren County community.

“This exhibit is an opportunity to recognize the achievements and resilience of the Jonesville community,” said Dr. Saundra Ardrey, Associate Professor of Political Science and Chair of the Jonesville Reconciliation Workgroup.

The stories featured in the exhibit were collected by members of the Community Scholars Program, a community outreach training series implemented by the Kentucky Folklife Program and the Kentucky Arts Council.

During their research, the Jonesville Community Scholars conducted oral interviews with former residents and their descendants, scanned family photographs and were directed to other community members with Jonesville connections.

“I feel I can speak for our Community Scholars group when I say we are proud to be the documentary team that worked on this oral history-driven exhibit that shares the Jonesville story for all to see and experience,” Bjorkman said.

President Caboni thanked those who collaborated on Thursday’s event, including the workgroup and community scholars, Jonesville residents and descendants, the Kentucky Museum, the African American Museum of Bowling Green, the Kentucky Arts Council, and the Kentucky Folklife Program.

“On behalf of all those at WKU, thank you. Thank you for your research, your commitment and your dedicated work to lead our institution in remembering and honoring Jonesville,” President Caboni said. “I look forward to many more events of this nature in the years ahead.”