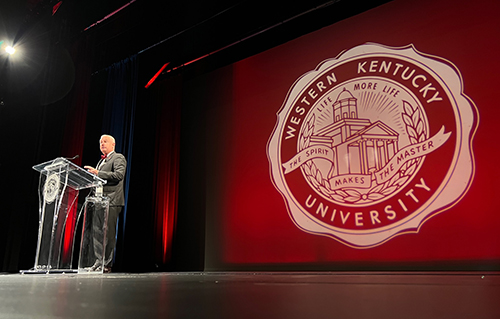 President Caboni began his address by noting the university’s progress on the WKU Strategic Plan, Climbing to Greater Heights, which enters its fifth year this year. He described the plan as the roadmap guiding all activity at WKU. He also reminded attendees that the university has not yet reached the halfway point of the plan, and that this year, WKU will evaluate progress toward reaching the plan’s goals. “However, I hope you will recall that it’s a ten-year plan, not a five-year plan. So, in this fifth year, I will convene a group to evaluate; to take a critical look at the work we’ve done; to examine where we need to press harder; and to suggest what new things we might pursue,” he said.

He highlighted the work of the university’s Diversity, Equity, and Inclusion (DEI) team during the past year, noting that WKU tied with the University of Kentucky for the highest score among Kentucky’s public, four-year institutions on the Council on Postsecondary Education’s diversity, equity, and inclusion report. Additionally, WKU increased its Campus Pride Index star rating in the fall of 2021 to a 4.5 out of five, a three star increase in just two years. Also, this summer the American Association of State Colleges and Universities recognized the ONE WKU Campaign, launched in 2020, for national excellence and innovation. He noted that the ONE WKU Campaign drives the campus’s DEI efforts, which include deliberative dialogues, book clubs, and the Inclusive Teaching Academy (ITA).

President Caboni also applauded the university’s achievements in fundraising. Over the past five years, the university has raised more gifts than in any other five-year period in WKU’s history, securing $171 million since 2017. As he shared, this concludes the most successful decade of fundraising in the institution’s history, with gifts totaling nearly $303 million. (More: Celebrating WKU's most successful decade of fundraising to date)

A significant component of the university’s fundraising success has been the WKU Opportunity Fund, announced in 2018 to support students facing financial difficulties. In just four years, the fund surpassed its initial goal of $50 million, leading university officials to establish a new $100 million goal. President Caboni noted that, to date, the Opportunity Fund has grown to $70.5 million, leading to the creation of 184 new endowed scholarships.

He reflected on a number of recent investments to the institution’s infrastructure, which have totaled $392 million since 2017. Notably, in 2018 WKU formally dedicated Ogden College Hall, housing many of the university’s science disciplines, followed later that fall by Hilltopper Hall, a residence hall located near the center of campus. In fall 2021, the university opened Normal and Regents Hall, two cornerstone residence halls in WKU’s First Year Village. Finally, in the spring of 2022, the university opened The Commons at Helm Library, which transformed a traditional campus library into an intellectual hub where students, faculty, and staff can gather to share ideas and engage in active learning beyond classroom walls.

He also provided a snapshot of the university’s recent research accomplishments. In Fiscal Year 2021, WKU faculty received more than $16.1 million in research funding, up from $14.1 million the previous year. This total included state grant funding, as well as funding from national agencies such as the Centers for Disease Control and Prevention (CDC), the United States Department of Energy, the United States Department of Education, the Environmental Protection Agency (EPA), and the National Aeronautics and Space Administration (NASA).

Examples of research projects included engaging new technologies in the field of dairy science at WKU’s Smart Holstein Lab, creating a virtual reality platform to train child welfare professionals, and utilizing the largest optical telescope in the state at the Bell Observatory. Additionally, a number of research initiatives are underway at WKU’s Innovation Campus, including collaborative work with Holley Performance Products, Louisville-based non-profit Kentucky to the World, and the Metals Innovation Initiative (MI2), which provides collaborative and sustainable executive leadership to attract and promote advanced research, commercialization, and talent development in Kentucky’s metals industry. President Caboni noted the importance of providing research opportunities for students. “The size and scope of our research enterprise means we make available to a significant portion of our undergraduates the experience of discovery and knowledge creation – unlike smaller, less research-intensive institutions,” he said. “This means our students are able to participate in projects that will propel their careers.”

Looking ahead to the 2022-2023 academic year, President Caboni noted that WKU will continue its work to increase retention rates as the university moves closer to its goal of 80% retention. “To retain even more students, we will need to redouble our efforts and to work more holistically across our institutional silos than we have before -- breaking down organizational barriers to student success, while working to support and intervene proactively with those students facing challenges, be they academic, social, financial or mental health,” he said.

He also reaffirmed the university’s commitment to DEI initiatives. The university is awaiting final approval to create the first-ever staff cultural competency certificate in Kentucky. President Caboni shared that the university is also developing a similar certification for students. “It is about diversity, equity, and inclusion. But most importantly, it’s about ensuring that every person finds their place at WKU and feels a part of our community,” he said.

President Caboni stated that WKU will continue its work with first-generation students. “If there is a subgroup that requires additional investment of our time and attention, it is this group,” he noted. In November 2021, the university launched its First-Generation Faculty and Staff Initiative to identify faculty and staff across campus who were themselves first-generation college students. This group seeks to increase student success by creating an easy-to-navigate environment for first-generation Hilltoppers. President Caboni shared that within the first two weeks of the program’s announcement, more than 200 faculty and staff volunteered to participate. He shared that the university will expand that initiative even further this academic year.

Turning his attention to the physical campus, President Caboni discussed current or upcoming campus improvement projects. He noted that the removal of the Garrett Conference Center in 2021 created an opportunity to separate pedestrian and vehicular traffic and create additional outdoor spaces for academic and social activities. He also shared that the university will soon completely renovate Cherry Hall, perhaps the most iconic structure on campus. The project will preserve and transform the building while ensuring that it remains viable for many years to come. Additionally, he noted that the new Gordon Ford College of Business building will open in the fall of 2025, and he thanked the Kentucky legislature for their support in securing funding to allow this institutional goal for the past 20 years to become reality. “When complete, the College of Business building will serve as a national model for how business education works in an applied setting,” he said.

President Caboni also previewed a number of milestones which the university will celebrate this academic year. These include the 20th anniversary of the institution’s campus facility in Glasgow, Kentucky; the 20th anniversary of the College of Health and Human Services; a dedication ceremony for The WKU Commons at Helm Library; an event to honor the people, community, and legacy of Jonesville; and the dedication of Munday Hall in honor of Margaret Munday, the first African-American student to enroll in classes at WKU.

“The foundation of her work likes in connecting with students and building relationships that strengthen over time,” he said. “She is part of the fabric that makes WKU special, and she has consistently made a difference in our community.”

Dr. Sales currently serves as the university’s Dean of Students and Assistant Vice President for Student Life and is also the Executive Director of TRIO Programs at WKU and the Intercultural Student Engagement Center. Her work with TRIO Programs at WKU has led to the securing of millions of dollars in federal grants to support low-income, first-generation students as well as those with disabilities.

“While helping students makes the climb at WKU, Martha emphasizes the potential for lifelong transformation through a college degree,” Caboni said. “With four degrees earned at WKU, one more than a triple Topper, she serves as an example and a role model for our students.”