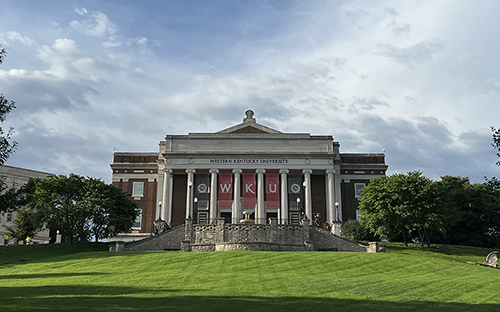 AASCU selected WKU for the Excellence & Innovation Award for DEI Leadership for its outstanding results and potential to influence and serve as a model for other institutions.  This award recognizes AASCU member institutions that demonstrated an outstanding commitment and dedication to diversity, equity, and inclusion on their campus that led to removing barriers, improving student life, creating an inclusive environment on campus for all individuals, and serving as a role model in advancing social justice.

The ONE WKU Campaign, which launched in 2020, comprehensively drives DEI efforts across campus, including book clubs, deliberative dialogues, and the Inclusive Teaching Academy (ITA). The ITA was the first program in the state to be approved by the Council on Postsecondary Education for its Cultural Competency Credential.

“It is such an honor to be recognized for the work we have done with the ONE WKU Campaign,” said Dr. Molly Kerby, Co-Chief Diversity Officer. “While our work is just beginning, we have made some major strides in the areas of equity and inclusion over the last couple of years. I think our success is due to the creation of a collaborative process of change-making that includes a diversity of voice, talent, and thought; cooperation and teamwork truly make the difference.”

Award recipients will be recognized during AASCU’s Annual Conference scheduled for Nov. 12-15 in Carlsbad, California.

For more about the ONE WKU campaign, visit https://www.wku.edu/dei/onewku.php

Twenty-four individuals have been selected for the upcoming WKU Staff Leadership Institute (SLI) and met for the first time on September 28.