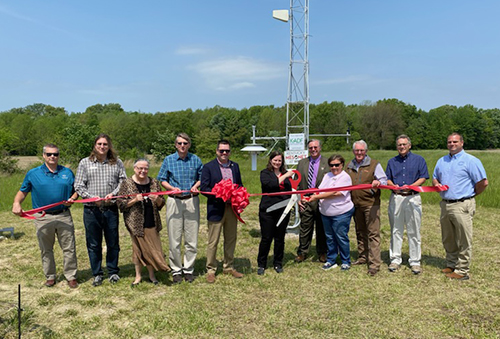 The Kentucky Mesonet at WKU dedicated a new station Monday in Ballard County.

The station is located 5 miles northeast of La Center near Bandana on property owned by Benny and Terre Cooper.

“The station represents a beautiful partnership between many people,” said Schargorodski, Interim Director of the Kentucky Mesonet at WKU and Kentucky Climate Center. “This area of the state is significantly underserved with regard to weather data. Having these data points from Ballard County will aid the National Weather Service with forecasting and warnings, as well as provide a high-quality reference dataset for agriculture interests in the county. The addition of the Ballard County station moves the network toward its goal of one station per county.”

The Kentucky Mesonet at WKU, the Commonwealth’s official source for weather and climate data, has 76 stations in 71 counties. The Ballard County station is the fifth located in the Jackson Purchase region of western Kentucky.

The Mesonet stations collect real-time data on air temperature, precipitation, humidity, barometric pressure, solar radiation, wind speed and direction, soil moisture and soil temperature and transmit it to the Kentucky Mesonet at WKU Operations Center (housed at WKU’s Center for Research and Development) every five minutes, 24 hours per day, throughout the year. The data is available online at www.kymesonet.org.

“The Ballard County station has the standard Kentucky Mesonet instrumentation suite and is also outfitted with multi-level temperature and wind and a webcam. A unique feature of this station is two soil probe pits for the advancement of soil research with the University of Kentucky,” Schargorodski said.

About the Kentucky Mesonet at WKU: The Kentucky Mesonet at WKU is the Commonwealth’s official source for weather and climate data. The statewide network includes 76 stations in 71 counties. The Mesonet stations collect real-time data on air temperature, relative humidity, barometric pressure, precipitation, solar radiation, wind speed and direction and transmit it to the Kentucky Mesonet Operations Center at the WKU Center for Research and Development every five minutes, 24 hours per day, throughout the year. The data is available online at www.kymesonet.org. Megan Schargorodski is serving as Interim Director of the Kentucky Mesonet at WKU and Kentucky Climate Center. The project was initially funded with a $2.9 million federal grant for the Kentucky Climate Center, part of WKU’s Applied Research and Technology Program. The first station was installed at the WKU Farm in May 2007. In recent years, staff have been working to build a broad base of support across Kentucky to continue development and maintenance of the network. The 2022 biennial budget approved by the General Assembly added $1 million to the Kentucky Mesonet, bringing total state funding to $1,750,000 each year.