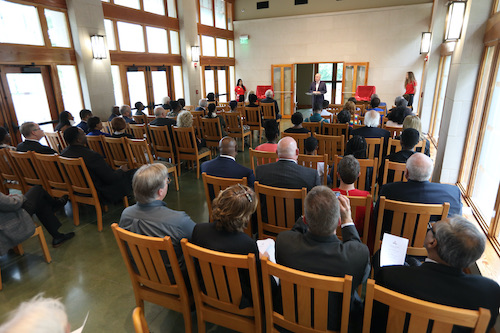 Townsend and Williams, both of Bowling Green, were honored for their exemplary contributions to WKU, the state, the nation or the world.

“We strive to prepare our graduates to become productive members of society who give both freely and abundantly of their time, their resources and their talents to support the success of future generations,” President Timothy C. Caboni said. “That mission is made easier when we can point our students toward shining examples of those who embody these traits. And we have perhaps no better examples of selflessness, hard work and excellence than the two individuals we honor here in our chapel together this evening.”

Townsend, a longtime educator and a 2015 inductee into the Gov. Louie B. Nunn Kentucky Teacher Hall of Fame, received an honorary doctorate of humanities.

Williams, executive director of the Housing Authority of Bowling Green who has partnered with WKU on numerous projects, received an honorary doctorate of public service.

Townsend was unable to attend Thursday’s ceremony, but provided remarks that were delivered by family member and WKU retiree Johnalma Barnett.

Townsend, who earned her master’s degree in education from WKU in 1979, recalled growing up in the Jonesville community where Diddle Arena and other WKU buildings now stand. “I think about all that and consider how lucky I am in many respects because when I attended WKU I was back home,” she said.

Townsend dedicated the honor to the memories of her great-grandmother, grandmother and mother as well as other loved ones, neighbors and friends who contributed to the Jonesville community.

In a career that spanned nearly 40 years, Townsend became one of Kentucky’s most decorated and influential educators.

Her honors include being named a Kentucky Distinguished Educator, working with a statewide leadership team to oversee the implementation of the Kentucky Education Reform Act and serving on the Board of the Kentucky Council of Teachers of English.

She also worked to preserve the Jonesville community’s history by donating a collection of poems and essays to the Kentucky Museum and by making philanthropic contributions to the Jonesville Academy.

Williams, a native of Alabama, is an advocate for people who are seeking safe and reliable housing and opportunities to grow beyond their circumstances.

“I want to do something that would outlive me. That’s been my intention,” he said. “In the words of Dr. Martin Luther King, he said everybody can be great because everybody can serve.”

Williams expressed gratitude for WKU’s support of programs to serve children and residents at the Housing Authority of Bowling Green. Those partnerships also serve WKU students in teacher education, social work, health and other academic areas.

Under his leadership, the Housing Authority of Bowling Green has earned local, state and national recognition for its efforts to improve the lives of those it serves.

Williams is a recipient of the Citizen of the Year for the Bowling Green Noon Lions Club, the Jefferson Award, the WKU President’s Diversity Award and the Lift Every Voice and Sing Award from the Cynthia and George Nichols III Intercultural Student Engagement Center. He was inducted into the Kentucky Civil Rights Hall of Fame in 2014.