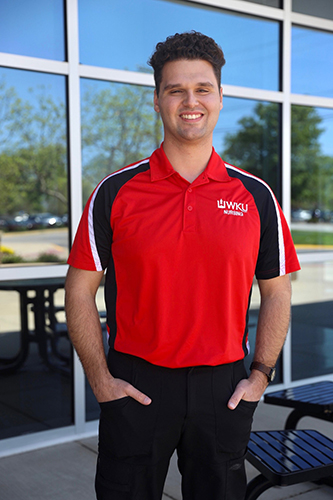 “From the beginning, I knew that I wanted to do something where I could use my skill set to help others. This healthcare profession is ever-changing, hands-on, and requires compassion and care,” said Parker Cassady, a WKU senior from Glasgow.

Cassady said he knew he wanted to enter an occupation that would be both challenging and rewarding at the same time, and a situation within his family confirmed his decision.

“During the last several weeks of my study abroad experience, I was informed that my grandmother was critically ill in the ICU located in my hometown. I ended up coming home a week early from Australia to be with her and to support my family,” Cassady said.

At that time, he had just spent nearly five months at La Trobe University in Melbourne, Australia.

“While this was a very difficult time, the interactions that my family and I had with the nurses in the ICU ultimately helped me to decide to pursue nursing. They were so caring and informative and gave us the time to make decisions regarding my grandmother’s health. She passed away in the hospital, and a few weeks later I made the decision to become a nurse.”

Cassady explained that studying abroad helped him figure out what he wanted to do with his future career and strengthened him as an individual. “I was immersed in a different culture therefore it broadened my world perspective.” He had visited the Great Barrier Reef, Tasmania, Sydney, and Adelaide before returning home to be with his family.

Once Cassady took the step to join the Nursing program, he was able to learn inside and outside of the classroom.

“As a nursing student, we participate in a variety of clinical experiences and a senior practicum. In clinical and in practicum, we become part of the healthcare team in a variety of settings, most notably the hospital,” Cassady shared. “My senior practicum, especially, allowed me to apply what I have learned in the classroom to practice. I was fortunate enough to be placed at TJ Samson Community Hospital where I worked in the COVID-19 ICU alongside a great preceptor and an excellent healthcare team. I was able to both observe and participate in the care of a very relevant healthcare situation.”

Cassady also pointed out his High Acuity for Nurses course. “This course is focused on nursing in the intensive care setting. Since I plan to work in an ICU, this class has been both enjoyable and beneficial to me in my future career.”

Participating in Delta Tau Delta and being a part of the Mahurin Honors College helped to shape his WKU experience as well.

“During my years in my fraternity, I was fortunate enough to have met many lifelong friends and served on the Executive Board throughout my entire active membership as the Director of Standards. This experience challenged me and allowed me to further develop my skills as a leader.”

Cassady added that the Honors College became an exceptional outlet to meet people and expand his education. “As an honors student, I’ve completed several augmentations and presentations for various classes. These experiences forced me out of my comfort zone and challenged me to think more critically.”

To learn more about the WKU Nursing Program, visit wku.edu/nursing.

To learn more about the Mahurin Honors College at WKU, visit wku.edu/honors/.

Here is a listing of WKU events for Tuesday, June 28, through Saturday, July 23.