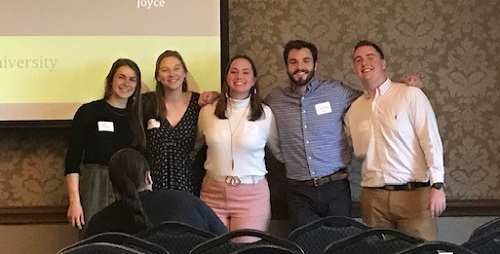 Groups representing five local universities were given the task of proposing a development idea for an 1,800-square-foot dilapidated service station for a new social enterprise that would benefit the surrounding community. The Buchanan St. Art District is located in a low-income area that is experiencing the effects of gentrification.

“This required thoughtful redevelopment of the property to preserve and serve the racial and socioeconomic diversity of the community despite the rapid redevelopment occurring all around and on Buchanan Street – all with a social mission in mind,” Peake said.

After the team spent time at the site Monday morning and gathered more information from the project director, the students decided that any proposed idea should benefit the community in both the short and long term.

“I looked up at the ceiling where there was intricate trim work all over the ceiling, and that is where the idea come to me: we make a carpentry shop,” she said. The idea is to teach woodworking skills and then sell the finished products in store, online, and to Nashville businesses.

“There is pride in being able to make something beautiful that people actually value and want,” Cavin said. The proposed company would employ woodworking apprentices who would create items on-demand as well as sell them in the storefront. She added that woodworking classes are gaining in popularity and could generate more traffic in the Buchanan St. area, which is another goal of the overall project.

“We were all proud of the business we designed,” Brooks said, adding that each team member contributed their unique talents to the project, whether it was crunching the numbers, inserting the creative spark, or simply keeping the group on task for the 2.5-hour time parameter they were given to complete the task.

“The whole process forced us to think quickly and be on our toes the whole time,” Cavin said. “After all the teams presented, the judges said that our group had the most confidence and the best presentation skills in the competition, which was a huge compliment.”

“That confidence came from the collaborative approach to the project,” Brooks said.