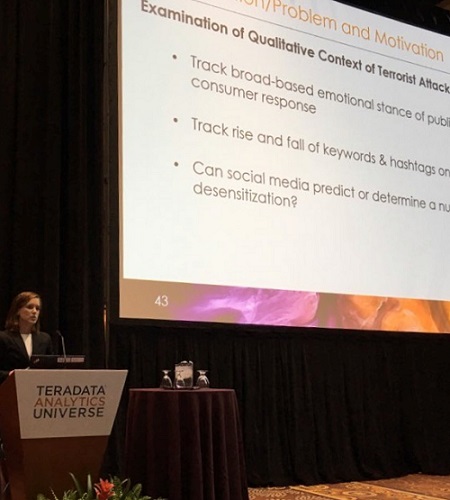 Gordon Ford College of Business student Kyla Scanlon was selected as a finalist for the 2018 Teradata Analytics Universe Conference, which was held October 14-18 in Las Vegas.

Scanlon, an economics, finance, and data analytics triple major from Louisville, was awarded the TUN Student Scholarship, which covered her expenses for the conference. During the event, she competed against 10 teams of students from universities across the country. She was the only team comprised of a single student. Several teams also featured graduate-level students. The title of her research project is “Twitter and Terrorism.”

“It was cool to be among some of the best minds in data, and see how sharp some of the ideas were,” Scanlon said. “I brought back several ideas for my own research. I’m excited for the future of my own research, but being able to help others with their own ideas through the connections I’ve made has been fantastic.”

Dr. Lily Zhuhadar, Professor in the Department of Information Systems, serves as one of her faculty mentors and said she is impressed with the high-level research Scanlon is able to produce.

“Kyla is a top-notch student,” Dr. Zhuhadar said. “Sometimes, when we meet together, I have little to nothing to add to her information because she’s gone above and beyond where I thought she would be at that point. Additionally, she earned a WKU FUSE Grant, which will help her further this research.”

“Ms. Scanlon is an exceptionally bright and talented student,” said GFCB Interim Dean Cathy Carey. “She is a leader, an innovator, and volunteers in multiple capacities. She represents WKU well with the high-quality research she produces, and she is very deserving of this recognition.”