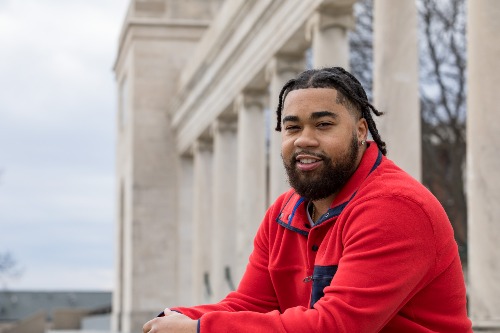 Tony Thomas Jr.'s college journey did not start at Western Kentucky University. However, when Thomas began exploring new college options, WKU's diversity within its campus culture drew him to The Hill.

Thomas is a Business Management major and Economics minor, "I chose my degree program because as a kid, I always envisioned myself becoming an entrepreneur. Being my own boss has always been a life goal of mine."

Thomas said transferring to WKU was one of the best decisions he has ever made. He is grateful for for the diverse people he has met and the "extra" things GFCB offers, like career-ready workshops.

"The best part of my experience at WKU is connecting and networking with people of different backgrounds. In reality, being teachable and outgoing is mandatory when making these connections."

The Intercultural Student Engagement Center (ISEC) has also tremendously impacted Thomas. Specifically, Ms. Angie Link, who is his WKU "Mom," "she has always greeted me with a smile when I entered the office. She is very motivating and encouraging with her words of wisdom."

Thomas has also attended the ISEC Recognition Ceremony. He said the experience was encouraging and motivating because it showcased and recognized minorities receiving their degrees. "It gives students who are currently in school the extra push and motivation they need to reach the finish line of earning their degree."

Thomas said another highlight of his time at WKU has been the Step Show. He said that at his previous college, they did not have the National Pan-Hellenic Council (NPHC). "To an ordinary person, someone may see this as just a "step show," but I see this as a representation of my culture with hidden talents.

Thomas credits his parents for inspiring him and encouraging him to pursue his degree. He said, "transferring to WKU was one of the best decisions I've made in my life. Western has one of the best business programs in Kentucky, and WKU has prepared me mentally for the real world."

Thomas's advice for future students with a similar background is, "WKU is a phenomenal institution and great environment to meet new people…step out of your comfort zone and get involved on campus."

After A Successful Inaugural Camp in 2021, Summer Camp Doubles In Size

WKU Alumni Celebrates a Significant Milestone for His Family