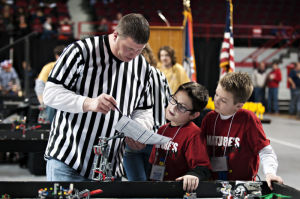 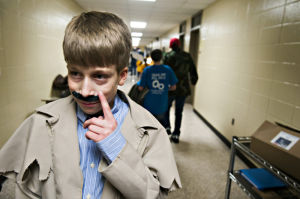 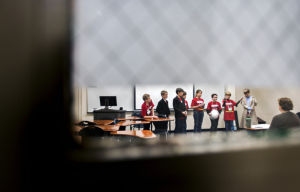 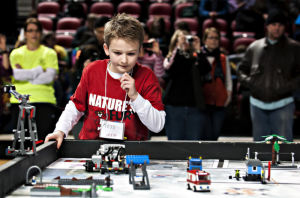 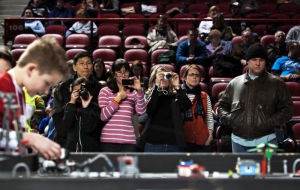 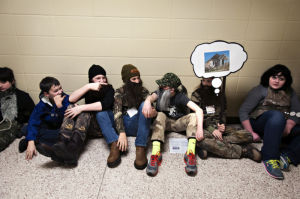 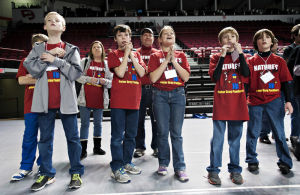 For Carrie Koedyker, the best part about coaching a robotics team is watching students learn how to work together.

“I enjoy the process of seeing them go from a group of individuals to a team,” she said.

Koedyker, a gifted and talented teacher at Potter Gray and T.C. Cherry elementary schools, has led a robotics team to the Kentucky FIRST LEGO League State Robotics Championship every year for six years. On Saturday, the Potter Gray Panthers competed at the championship at Western Kentucky University’s E.A. Diddle Arena.

The eight fifth-graders on the team were excited to be at the competition, though they had a packed day with three robot matches, a presentation and a technical interview.

Since October, the team has worked at least three hours a week on its robot. Ross Millet, 10, has enjoyed learning the science and math that goes along with robotics.

“My favorite thing is I’ve never really programmed a robot before, and I think it’s really cool that I figured out how to program this,” he said.

Reed Hensley, 10, is glad to be part of the team because it allows him to get to know his classmates better as well as learn about robot technology.

“We get to do fun things that we love, and we’re also with our friends,” he said.

Being on the robotics team has him thinking of becoming an engineer.

“I always wanted to be a doctor before this, but now that I’ve worked with robots, I kind of want to be an engineer because it’s really fun,” Reed said.

The Potter Gray team was at a disadvantage Saturday because many teams in the championship were from middle schools and had students with several more years of experience, Koedyker said.

“Being an elementary school team, we’re kind of an underdog,” she said.

Koedyker thinks the Potter Gray’s team success stems from the students’ ability to work together.

“I just think we work really hard on teamwork, and I think that’s really benefited us,” she said. “The most important thing is to have the core values and the teamwork.”