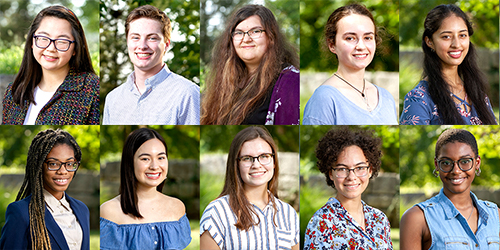 Ten students at The Gatton Academy of Mathematics and Science in Kentucky at WKU have received nationally-competitive National Security Language Initiative for Youth (NSLI-Y) Scholarships for immersive, critical language study this summer and next academic year.

NSLI-Y scholarships are sponsored by the U.S. Department of State, funding summer and academic year programs in which participants study critical languages. Typically, the programs are carried out through immersive study abroad, with participants taking intensive language courses, living with a host family, and visiting culturally-significant sites of their host nation.

Due to the global COVID-19 pandemic, all 2020 summer awards are being carried out through five-week NSLI-Y Virtual Summer Intensives. Participants will still engage in daily language learning, cultural learning, and intercultural understanding—all online.

The Gatton Academy has three critical language tracks in Arabic, Mandarin Chinese, and Russian called STEM + Critical Languages. These programs are carried out through collaborations with the WKU Department of Modern Languages and the Chinese Language Flagship Program at WKU. Through these optional curricular tracks, students choose to pair progressively rigorous critical language study each semester alongside the classic STEM curriculum offered to all Gatton Academy students.

This marks the 10th-consecutive year that Gatton Academy students have received NSLI-Y Scholarships.  Recipients are noted below, with their sending school in parentheses.

Appelman will continue her study of Chinese this summer through her award.  She is a graduating student in The Gatton Academy’s STEM + Chinese track taking Chinese classes in WKU’s Department of Modern Languages. Appelman is the daughter of Pat and Karen Appelman. “I was originally interested in learning Chinese because I’m from China,” Appelman said. “Now, I hope to become fluent and travel overseas to really experience my birth-culture.”

Givens received the summer scholarship to study the Chinese language.  Givens is a graduating Gatton Academy student from Greensburg and is the son of David and the late Lynne Givens. “With an expected career in international business, the ability to communicate with and appreciate foreign cultures are valuable traits to have,” Givens said.

Grimm will study the Korean language through her NSLI-Y Virtual Summer Intensive.  Grimm is a Gatton Academy junior and is the daughter of Jeff and Wendy Grimm of Ashland. “This is an opportunity I never thought I’d have,” Grimm said. “I never could have imagined this a year ago.”

Hare will continue her study of the Russian language through her award this summer. She is a graduating student in The Gatton Academy’s STEM + Russian track taking Russian classes in WKU’s Department of Modern Languages. Hare is the daughter of Drs. Janelle and Timothy Hare of Morehead. “Although the NSLI-Y program will look different this year, I’m grateful for the opportunity to continue exploring language and see my Russian skills grow,” Hare said.

Hegde will study Turkish through her NSLI-Y Virtual Summer Intensive.  Hegde is a Gatton Academy junior and is the daughter of Drs. Narasimha and Shailaja Hegde of Union.  “Participating in NSLI-Y will help me further my language and cultural skills while also introducing me to Turkey’s spirited culture,” Hegde said.

Hunter-Hays will continue her study of the Chinese language this summer. She is a first-year Gatton Academy student studying Chinese through the STEM + Chinese track. Hunter-Hays is the daughter of Rosalyn Hunter of Hodgenville. “NSLI-Y will help further my language skills for my future majors in Chinese and Computer Engineering,” Hunter-Hays said.

Pedersen received an academic year offer for the NSLI-Y program in Taiwan during the upcoming academic year.  She is a graduating student in The Gatton Academy’s STEM + Chinese track taking Chinese classes in WKU’s Department of Modern Languages. After participating in the 2019 NSLI-Y summer program in Taiwan, Pedersen was eligible to apply for the year-long program. “The summer program transformed both my language skills and cultural view, motivating me to apply for the academic year program to continue this growth,” Pedersen said.

Lauren Taylor will continue her study of the Arabic language this summer.  She is a first-year student in The Gatton Academy’s STEM + Arabic track taking Arabic classes in WKU’s Department of Modern Languages. She is the daughter of Patrick and Valerie Taylor of Cold Spring. “I applied to the NSLI-Y scholarship in the hope of accelerating my language learning as I intend to major in Arabic,” Taylor said.

Sasha Taylor will continue her study of the Russian language this summer. She is a first-year Gatton Academy student studying Russian through the STEM + Russian track. Taylor is the daughter of William and Nadya Taylor from Crestview Hills. “I’m most looking forward to the cultural activities,” Taylor said. “It’ll be different online, but I’m sure it will still be informative and fun.”

Unseld will continue her study of Chinese this summer through her award.  She is a first-year student in The Gatton Academy’s STEM + Chinese track taking classes in the Chinese Language Flagship program at WKU. Unseld is the daughter of Robert and Elizabeth Unseld of Bowling Green. Describing her goals for this summer, Unseld said, “By constructing a productive summer plan, I can supplement my language-learning journey and get closer to my goal of Chinese proficiency.”