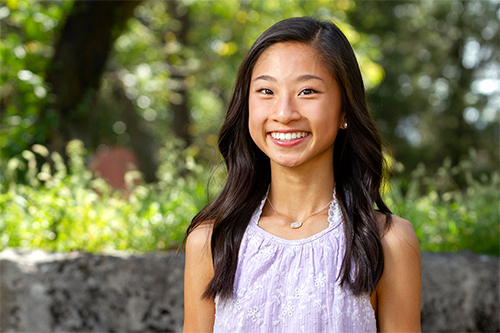 First-year Gatton Academy of Mathematics and Science in Kentucky student Gloria Huang (South Warren HS, Bowling Green) is one of only 60 students nationwide selected for the Council on Undergraduate Research (CUR) Posters on the Hill celebration.  CUR evaluated around 400 applications through a rigorous, highly competitive process.

Huang is the only Kentuckian selected for this year’s event.

Huang’s research is mentored by Dr. Richard Schugart of the WKU Department of Mathematics.  Her project uses 3D geometry to analyze the most influential factors in the treatment of diabetic foot ulcers.

This is the 24th Posters on the Hill event.  The annual event is hosted for Members of Congress and their staff to learn about the importance of undergraduate research by talking directly with the student researchers involved in these programs.

“It is an honor for Gloria to have her work accepted for Posters on the Hill,” Schugart said.  “A very limited number of students around the country are selected to have the opportunity to present their research before elected officials on Capitol Hill.  I am very proud of her and her efforts.”

Huang began research immediately upon enrolling at The Gatton Academy and WKU in August 2019.  Prolific in her work, she has additionally been selected to present at the National Institute for Mathematical and Biology Synthesis Undergraduate Research Conference, the National Conference on Undergraduate Research, the WKU Mathematics Symposium, and the WKU Student Research Conference, all in addition to several science fairs.

“Pursuing scientific research has given me the skills, knowledge, and opportunities for academic and personal growth,” Huang said.  “It excites me to given the opportunity to educate policymakers on the importance of funding undergraduate research.”

Because of the COVID-19 pandemic, the Posters on the Hill event that was originally scheduled to take place in Washington, DC this week has been turned into a virtual event.  Student posters will be presented to legislators and the public via Twitter on Tuesday, April 21.

Follow Huang’s presentation @gloriahuangPOH and the Posters on the Hill event @CURinAction, #POH2020, and #POHGoesVirtual.

“While unprecedented circumstances have prompted the cancelation of the in-person event, I am extremely grateful for the hard work of the Council on Undergraduate Research in planning a virtual event to continue to honor our achievement of being accepted to the 2020 Posters on the Hill celebration,” Huang said.