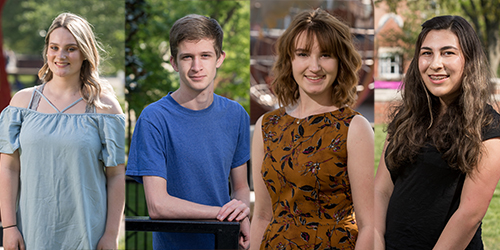 BOWLING GREEN - Four students at the Carol Martin Gatton Academy of Mathematics and Science in Kentucky at WKU have received nationally-competitive National Security Language Initiative for Youth scholarships for immersive, critical language study this summer.  They will travel to China, Estonia, Jordan, and Moldova.

Allara will travel to Moldova for intensive Russian study with her NSLI-Y scholarship this summer.  She is a first-year student in The Gatton Academy’s STEM + Russian track taking Russian courses through WKU’s Department of Modern Languages.  Allara is the daughter of Andrea Allara of Pikeville.

“I want to be able to grow in my Russian speaking, listening, and writing skills while in Moldova,” Allara said. “This summer will help me grow not only in my Russian language skills, but also as a person. I will be able to create friendships and bonds with individuals from across the country that have similar interests.”

During Allara’s first year at The Gatton Academy, she has also traveled with the school to Italy.

Bramley will continue his study of the Russian language this summer with his NSLI-Y scholarship in Estonia.  Bramley is a second-year Gatton Academy student who has studied Russian through WKU’s Department of Modern Languages.  He is the son of Candy Higdon and David Bramley of Fairdale.

“NSLI-Y will allow me to hone my Russian skills and learn about the culture,” Bramley said.  This will be Bramley’s first study abroad experience.

Hamm will continue her study of Chinese language this summer with her NSLI-Y scholarship in Shanghai, China.  She is a graduating student in The Gatton Academy’s STEM + Chinese track taking courses in WKU’s Department of Modern Languages.  She is the daughter of Tina Benge-Hamm and Mark Hamm of Somerset.

“Through full immersion, I expect my language skills to cultivate and blossom. Furthermore, I will not only gain a deeper understanding of a culture rooted in a history that extends thousands of years, but I will also gain an understanding of culture that is changing the landscape of modern society. This knowledge will be used in my continuing language study and career path,” Hamm said.  Hamm will continue her studies at WKU majoring in Chinese and Geology.

Yaacoub will travel to Jordan to study Arabic with her NSLI-Y scholarship this summer.  She is a first-year student in The Gatton Academy’s STEM + Arabic track taking Arabic classes in WKU’s Department of Modern Languages.  Yaacoub is the daughter of Dr. Jocelyn Mini of Lexington and Dr. Waddah Yaacoubagha of Nicholasville.

“The NSLI-Y Scholarship will be an amazing opportunity to study Arabic in an applied setting and utilize dialectal vocabulary and language patterns that are common to everyday speech,” Yaacoub said. “I believe it will have a lasting impact on my verbal communication skills and conversational ability.”

During Yaacoub’s first year, she has also traveled abroad to China on a Confucius Institute research-intensive program and to Qatar as a Gatton Academy team member for the 4th International Schools Arabic Debating Championship.