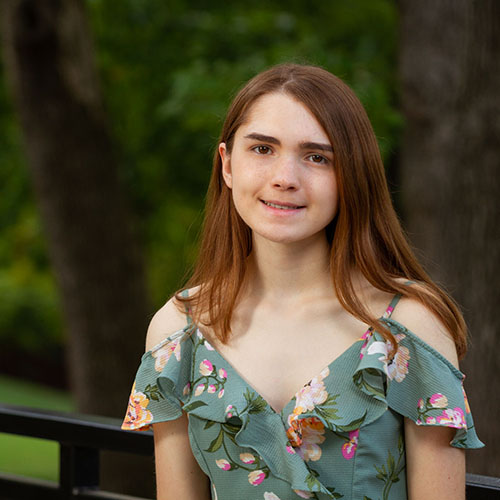 The Society for Science announced the top 300 scholars in the Regeneron Science Talent Search 2023, the nation’s oldest and most prestigious science and math competition for high school seniors. Among those named was Gatton Academy of Mathematics and Science and Paul. G. Blazer High School senior, Hannah Laney for her project, “Synthesis of 4d- and 5d-Based Transition Metal Oxides.” Laney will be awarded $2,000 for this achievement.

Scholars are selected from a pool of 1,949 applicants from 627 high schools across 48 states, Washington, D.C., Puerto Rico, and four other countries. Laney was chosen based on her outstanding research, leadership skills, community involvement, commitment to academics, creativity in asking scientific questions, and exceptional promise as a STEM leader demonstrated through her original, independent research project, essays, and recommendations.

The full list of scholars can be viewed here: Top 300 STS Scholars.

“Congratulations to the top 300 scholars in this year’s Regeneron Science Talent Search,” said Maya Ajmera, President and CEO, Society for Science and Publisher, Science News. “The enthusiasm and quality of projects from this year’s participants were just outstanding. Each year, I am tremendously impressed by the ingenuity that the students bring to the competition. Their hard work, creativity, and perseverance should be applauded.”

The Regeneron Science Talent Search recognizes and empowers our nation’s most promising young scientists who are generating innovative solutions to solve significant global challenges through rigorous research and discoveries. Collectively, Science Talent Search alumni have received millions of dollars in scholarships and gone on to be awarded Nobel Prizes, Field Medals, MacArthur Fellowships, and numerous other accolades.

In her research, Laney grew crystals called 4d- and 5d- transition metal oxides in order to measure their properties. These synthesized crystals may potentially advance current technology, such as developing improved methods of data storage. Laney worked under the mentorship of Dr. Jasminka Terzic within Western Kentucky University’s Physics and Astronomy Department.

“Hannah Laney is a remarkable young person in so many ways. We are thrilled she is being recognized for her science talent and appreciate the support of Dr. Terzic and the WKU Physics and Astronomy Department,” said Dr. Lynette Breedlove, Director of The Gatton Academy. “Hannah is a wonderful representative of The Gatton Academy and Ashland Independent Schools. She works hard inside and out of the classroom, while also actively contributing to the Gatton community and her home community.”

At Gatton, Laney is the Co-President of Math Club, a math peer tutor, and member of the Gatton Bible Study and International Clubs. Laney plans to pursue an M.D./Ph.D. and a career at an academic medical center.

“I want to thank my research mentor, the Gatton Academy, and my RIG sponsors. Without their support, I would never have had the opportunity to even be considered for this award,” said Laney. “To me, as a young person in STEM, research is a way to apply scientific knowledge outside of the classroom. Although learning what others have done can be fascinating, there’s just something remarkable about figuring new things out for yourself.”

On January 24, 40 of the 300 scholars will be named Regeneron Science Talent Search finalists. The finalists will then compete for more than $1.8 million in awards during a week-long competition in Washington, D.C., taking place March 9-15.

In 2017, Regeneron became only the third sponsor of the Science Talent Search to help reward and celebrate the best and brightest young minds and encourage them to pursue careers in STEM as a way to positively impact the world. Through its 10-year, $100 million commitment, Regeneron nearly doubled the overall award distribution to $3.1 million annually, increasing the top award to $250,000 and doubling the awards for the top 300 scholars to $2,000 and their schools to $2,000 for each enrolled scholar to inspire more young people to engage in science.

About Society for Science: Society for Science is a champion for science, dedicated to promoting the understanding and appreciation of science and the vital role it plays in human advancement. Established in 1921, Society for Science is best known for its award-winning journalism through Science News and Science News Explores, its world-class science research competitions for students, including the Regeneron Science Talent Search, the Regeneron International Science and Engineering Fair and the Broadcom MASTERS, and its outreach and equity programming that seeks to ensure that all students have an opportunity to pursue a career in STEM. A 501(c)(3) membership organization, Society for Science is committed to inform, educate and inspire. Learn more at www.societyforscience.org and follow us on Facebook, Twitter, Instagram, LinkedIn and Snapchat (Society4Science).