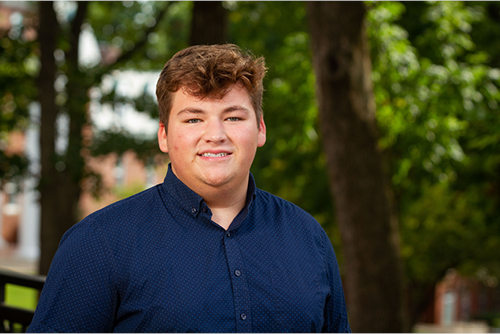 Gatton Academy and Breckinridge County High School Senior, Caden Lucas, has been named as a Semifinalist in the Class of 2023 Coca-Cola Scholars Program. With a pool of 91,000 applicants from across the country, Lucas has been selected in the top 2% of students based on academic excellence, leadership, and demonstrated service to the school and community. Semifinalists remain in the running for the final selection of 150 students who will each receive a $20,000 college scholarship. A joint effort of Coca-Cola bottlers across the country and the Coca-Cola Company, the Coca-Cola Scholars Program is the largest corporate-sponsored, achievement-based scholarship program in the US.

“We believe that identifying these young leaders throughout the country and encouraging their passion for serving others not only empowers the students, but also lifts up those around them,” said Jane Hale Hopkins, President of the Foundation. “The Coca-Cola system is dedicated to giving back to the communities they serve, and the Coca-Cola Scholars Foundation is proud to be a part of that commitment.”

Lucas has been a leader in and out of the classroom during his time at The Gatton Academy of Mathematics and Science at Western Kentucky University. He is the founder of the Gatton Model UN club, co-editor-in-chief of the Gatton Yearbook, and Governor for the Kentucky YMCA Youth Association. This past Summer, Lucas received a Research Internship Grant to fund eight weeks of research in the WKU Business Management Department focusing on the generational impacts on small businesses’ social responsibility behaviors and best practice methods for entrepreneurial bootcamps.

With plans to study international relations and political science in college, Lucas hopes to pursue a career in government and law. He has a passion for giving back to his community and being an active civic member of society. Choosing to apply to the Coca-Cola Scholars Program was in large part due to the influence previous Coca-Cola Scholars have had in his life and witnessing all they do for their own communities.

“Being selected as a Coca-Cola Scholar Semifinalist has been a highlight of my senior year. I couldn’t be more honored to be selected among these leaders, change-makers, and innovators. Everything that’s led up to this makes me realize I truly do have the best support system,” said Lucas. “I’m confident that my time at Gatton has been one of the foundational reasons behind my selection. The opportunities I’ve been able to pursue have prepared me well for my future endeavors.”

Semifinalists go on to complete Phase 2 of the application process, including essays, recommendations, and transcripts. After further review, 250 Regional Finalists will be announced in January and will continue to narrow down to the final 150 Coke Scholars in March. In addition to a college scholarship, Scholars will be welcomed into a growing community of over 6,750 Coke Scholars alumni.