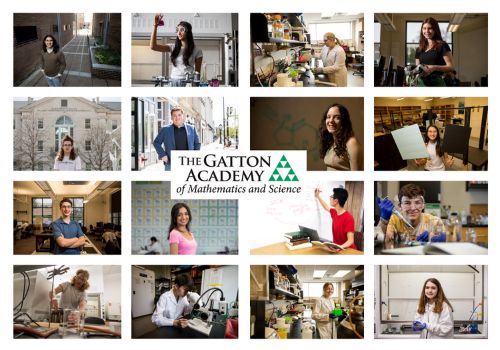 Several Gatton Academy students had the opportunity to participate in advanced research in a variety of academic fields during Summer 2022 through the Gatton Research Internship Grant (RIG) Program. The RIG Program began in 2010 after receiving a gift from Mr. Carol Martin “Bill” Gatton to offer students a chance to pursue research internships across the Commonwealth of Kentucky, the United States, and the world. This year, 16 students were awarded funding and worked with researchers at Western Kentucky University, the Icahn School of Medicine at Mt. Sinai, Brown University, and Franciscan University during the summer between their junior and senior years at Gatton.

Students shared that this program not only gave them an opportunity to contribute to research from a young age, but it also gave them the chance to participate without having to balance time and energy with their coursework. Brian Nguyen, who is completing his research at Brown University this summer, said, “You can use your break to fully dedicate yourself to working on a single project, a rare occurrence considering the academically competitive environment we live in. There are no classes or assignments to dampen your momentum.”

Maria Pfeifer, who is completing her research at Franciscan University, shared, “As a young person in STEM, research has opened doors to what I always though science should look like. My educational setting has been expanded beyond the classroom and into the lab.”

In its first 13 years, this program has offered 196 students opportunities to study STEM problems in their areas of interest in a devoted, full-time research setting.

The following are this year’s recipients:

Sean Korner (’23, duPont Manual HS) and Gabriel Nowaskie (’23, Bardstown HS) are using machine learning to find a specific metal organic framework which can be used to convert carbon dioxide into water. They are working with Dr. Bangbo Yan in WKU’s Chemistry Department.

Jiali Graham (’23, Model Laboratory School) is investigating the effect of aging upon the visual perception of object size. She is working with Dr. Farley Norman in WKU’s Department of Psychological Sciences.

Hank Helmers (’23, Danville HS) is conducting an empirical study on financial literacy and social media users. He is working with Dr. Jonathan Handy in WKU’s Department of Finance.

Hannah Laney (’23, Paul G. Blazer HS) is working on the synthesis of 4d- and 5d-element based transition metal oxides. She is working with Dr. Jasminka Terzic in WKU’s Department of Physics and Astronomy.

Caden Lucas (’23, Breckinridge County High School) is investigating the generational differences in how small businesses and family firms manage their socially-responsible behaviors. He is working with Dr. Whitney Peake in WKU’s Department of Management.

Divya Naidugari (’23, Randall K. Cooper HS) is looking at regenerative biology in the context of follicle regeneration. She is working with Dr. Sarah Millar at the Icahn School of Medicine at Mt. Sinai in Manhattan, N.Y.

Brian Nguyen (’23, South Warren HS) is devising a differential mathematical model determining the best method to chain specific reactions together. He is working with Dr. Brenda Rubenstein in Brown University’s Department of Chemistry in Providence, RI.

Kareena Pansuria (’23, South Warren HS) is developing an underwater adhesive. She is working with Dr. Benjamin McDonald in Brown University’s Department of Chemistry in Providence, RI.

Kellen Patterson (’23, South Warren HS) is producing polymer beads incorporated with photocatalysts, which degrade pollutants in aquatic environments. He is working with Dr. Matthew Nee in WKU’s Department of Chemistry.

Maria Pfeifer (’23, Owensboro Catholic HS) is comparing the executive function of women 18+ who are and are not on birth control. She is working with Dr. Stephen Sammut in Franciscan University’s Department of Psychology in Steubenville, OH.

The Gatton Academy of Mathematics and Science at Western Kentucky University received the 2022 Inspiring Programs in STEM Award based on efforts to inspire and encourage a new generation of young people to consider careers in STEM.

16 Gatton Academy students conducted research during the Summer of 2022 through the Research Internship Grant program.

The Gatton Academy of Mathematics and Science in Kentucky recently recognized 15 educators from across the Commonwealth for their support of high ability students. The educators were recognized at the program’s May 7 Commencement in Van Meter Hall.